Blog
U bevindt zich hier: Home1 / Blog2 / etiquette3 / 3 interesting articles about etiquette (click on the title for a link)... 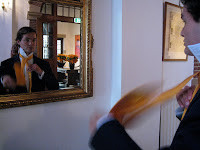 FRIDAY TIMES
Taking it beyond flowers and forks
Published Date: July 16, 2010
By Rawan Khalid, Staff Writer
Friday Times attended a first class dining course for teens to get an insight into the academic process. Each of the four teenage girls in attendance commented on the course that gives hands-on real life situations. Sara Al-Thukair said, “This is by far the best class I have ever taken! My only recommendation is that they should have more courses for teenagers. Everything I learned I will apply in my everyday life.

The Epitome of a Gentleman…
J HENRY
Published: 18 Jul 2010
“Cricket is a gentleman’s game…so you’d probably be a gentleman if you’re playing cricket,” laughs Daren Ganga, iconic sportsman and captain of the Trinidad and Tobago Cricket team. But in reality, he believes it’s about a lot more than that. His definition of a gentleman? “Someone who carries himself with a certain measure of class,” he says. “And when I say class, I mean how they speak, how they conduct themselves, how they operate with the fairer sex as well; someone whose integrity isn’t questioned, and has an honest, unbiased way of dealing with things.” His gentlemanly mannerisms he says, had both informal and formal influences, from his parents, as well as, of course, cricket. About his parental influences he says, “I think that is testimony to what I am today.

Rude shock
Kerrie Davies From: The Australian July 16, 2010 12:00AM
Minding your manners on the corporate social circuit is making a comeback.
Lane prefers to describe her area of expertise as “social skills” while fellow specialist Glen-Marie Frost uses “social protocol” to emphasise contemporary relevance. But whatever you call it, Lane says, it’s lacking in the business world, including among privately schooled and university-educated professionals.

Choose another article of your interest in the blog archive in the right column. Or scroll further down for books about protocol, interesting links, articles about protocol and protocol related tweets.
18 juli 2010/door protocol
https://protocolbureau.com/wp-content/uploads/2017/01/logo_protocolbureau_GOUD-5.png 0 0 protocol https://protocolbureau.com/wp-content/uploads/2017/01/logo_protocolbureau_GOUD-5.png protocol2010-07-18 08:16:002010-07-18 08:16:003 interesting articles about etiquette (click on the title for a link):