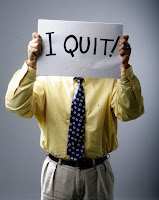 That apparently was a lesson lost on Steven Slater – the notorious JetBlue flight attendant who caused a media storm when he quit his job.
By now, most everyone has heard about Slater, who flew off the handle following an alleged confrontation with a passenger and quit his job with an obscenity-laced rant over the plane’s public address system before escaping down the plane’s emergency chute. His dramatic exit has resonated with many people who know what it’s like to work with rude customers or stressful job demands. But what he did was wrong, workplace experts say.