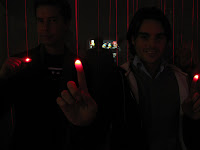 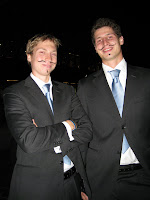 This year we visited various excellent perfomances in Theatre Aan het Spui, the Atrium of the municipality of The Hague and on the Spui Square. On Friday we enjoyed the spectacular musicians and visuals of Structed (Royal Academy of Arts) on every floor of the Atrium, and later on the concert of Jeff Mills and Mike Banks @ the same location. Our night began with a dance-show of Adrien Mondot and Cinematique, which can be seen on the first video’s included in this article.

Saturday we enjoyed a unique show of “Super Night Shot”: a real-time movie filmed on the streets of The Hague just one hour before its premiere. Four performers were sent out with four synchronised cameras to declare “War on Anonymity” on the city streets. The film culminates in “a beautiful Hollywood screen kiss between a hero and an unsuspecting co-star” before the four performers return to the venue to welcome the audience and play the four films side by side, unedited on a wide screen. The last 2 videos included in this article was recorded during this performance.
Furthermore we enjoyed “Plane Scape” in the Filmhuis (zaal5): Thousands of white elastic rubber bands are hung floor to ceiling. The elastic strips slice up the projected 2D image in space, exploding the screen into depth and scattering projected lines and planes into clouds of moving points. Changes in the movement of the projected imagery is accompanied by a six-channel sound composition.

Choose another article of your interest in the blog archive in the right column. Or scroll further down for books about protocol, interesting links, articles about protocol and protocol related tweets.
26 september 2010/door protocol
https://protocolbureau.com/wp-content/uploads/2017/01/logo_protocolbureau_GOUD-5.png 0 0 protocol https://protocolbureau.com/wp-content/uploads/2017/01/logo_protocolbureau_GOUD-5.png protocol2010-09-26 00:12:002010-09-26 00:12:00Festival for art & technology: This weekend we were @ TodaysArt

Protocol-assistant in Brussels needed Protocolbureau @ the day of the secretary in Drenthe on October 28, 2010. Director...
Scroll naar bovenzijde