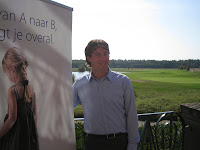 What do a church, a movie theater and a golf course have in common?
They are all places where a cell phone’s obnoxious ring can destroy the moment.
The green is an arena rife with rules on etiquette. With Southwest Florida’s thousands of golfers – and a course on every impeccably manicured hill – there’s no wonder some people believe rules are meant to be broken.
It’s just a game, after all.
Oh, no: Golf is a gentleman’s and gentlewoman’s game. For many, it’s a passion and a way of life. It is a game of honesty and integrity, golf professionals agree.
Read this article @ news-press.com

Unlike many sports, golf is for the most part played without the supervision of a referee, umpire or coach. The game relies on the individual golfer to show consideration for other players and to abide by the rules. New golfers are often in need of advice about customary behavior and practices to follow on course so that play proceeds safely and without delay. Here are 10 tips to help all players get the maximum enjoyment from the game.

The Spirit of the Game

Unlike many sports, golf is played, for the most part, without the supervision of a referee or umpire. The game relies on the integrity of the individual to show consideration for other players and to abide by the Rules. All players should conduct themselves in a disciplined manner, demonstrating courtesy and sportsmanship at all times, irrespective of how competitive they may be. This is the spirit of the game of golf.

Some examples of rules:
– Consideration for Other Players
– No Disturbance or Distraction

Read about all the golf etiquette @ usga.com