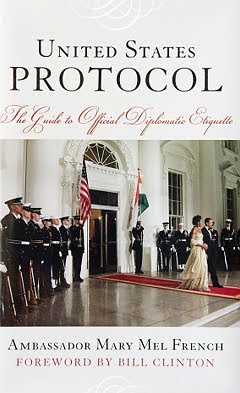 After serving eight years as President Bill Clinton’s chief of protocol, Mary Mel French has some tales to tell. Protocol, though, would prevent her from sharing many of them.

French
“We have a lot of stories,” she said. “Some we tell, some we don’t tell.”
French shared a few stories last night at Stephens College. Once, she was mistaken for Yasser Arafat’s wife (she was escorting him off a plane when the cameras started to flash). She also helped coordinate Nelson Mandela’s inauguration: The seating arrangement proved tricky, she said, because no one wanted to be seen next to Fidel Castro.
Mostly, though, French used her hourlong lecture to encourage young ladies to take good manners seriously. “Good manners never go out of style,” she said. “Today, some people don’t remember what good manners are.”
French, a 1958 Stephens graduate, was the inaugural speaker for a new lecture series at Stephens. Funded with an endowment from Stephens trustee Donna Ensign Marshall, the series aims to stimulate an interest at Stephens in international affairs.
Read the rest @ columbiatribune.com

The ushers of the Protocolbureau @ the Young Captain Award 2010, tonight in... How to Eat an Artichoke
Scroll naar bovenzijde