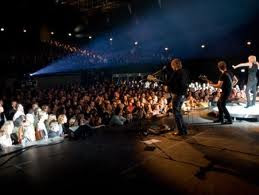 “Let’s have a toast,” sang Kanye West in September of this sometimes seemingly endless year, debuting a new song, Runaway, on the MTV Video Music Awards. Over a glassy keyboard sample and an old-school breakbeat, West intoned a gentle melody. Runaway, many expected, would offer apologies to Taylor Swift: this was the one-year anniversary of West’s notorious interruption of an acceptance speech by the country-pop princess, which led to his brief retreat from the media spotlight.

Instead of a rose, though, West’s outstretched hand held up a middle finger. Using obscene descriptives that the good girl he’d wronged would never utter in public, West saluted the jerks who just can’t (or won’t) help themselves, men too preoccupied with the pursuit of their own pleasure or power to be sensitive or even polite. Himself, most of all.

Runaway’s cheeky pathos returned West to his hard-earned place at the centre of pop’s conversation. That the song -the opposite of an apology -was such a success says a lot about pop’s current moral quandary, and the culture’s.

Choose another article of your interest in the blog archive in the right column. Or scroll further down for books about protocol, interesting links, articles about protocol and protocol related tweets.
23 december 2010/door protocol
https://protocolbureau.com/wp-content/uploads/2017/01/logo_protocolbureau_GOUD-5.png 0 0 protocol https://protocolbureau.com/wp-content/uploads/2017/01/logo_protocolbureau_GOUD-5.png protocol2010-12-23 22:56:002010-12-23 22:56:00In another year of trash talk and bad behaviour, pop stars escape into moral obliviousness