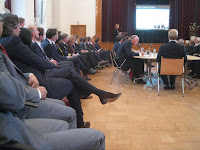 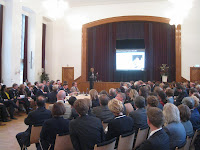 The Institute of Protocol The Hague & the Protocolbureau in The Hague were the organisers of a Protocol Seminar on Relationship management at the Prinses Julianakazerne in The Hague on Monday 10 October 2011.
The seminar was organised on the occasion of the visit of Ms Pamela Eyring, President and Director of The Protocol School of Washington, to the Netherlands.
Following Ms Eyring’s lecture, former Ambassador Eric Niehe and Mr Jan Bout, former CEO of Royal Haskoning discussed the merits of protocol and relationship management. Protocol specialist Major Hans van Reenen concluded the seminar with a lecture about ‘the Public Interest of Military Ceremonies’.
The Institute of Protocol The Hague and the Protocolbureau were honored with the presence of the Ambassadors to the Netherlands, Dutch protocol experts, event management and communication specialists on 10 October 2011.

Choose another article of your interest in the blog archive in the right column. Or scroll further down for books about protocol, interesting links, articles about protocol and protocol related tweets.
5 november 2011/door protocol
https://protocolbureau.com/wp-content/uploads/2017/01/logo_protocolbureau_GOUD-5.png 0 0 protocol https://protocolbureau.com/wp-content/uploads/2017/01/logo_protocolbureau_GOUD-5.png protocol2011-11-05 11:09:002011-11-05 11:09:00The lecture of Pamela Eyring on YouTube