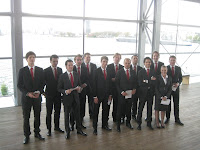 Today we were at the ‘World Press Photo Awards Ceremony’ in ‘Muziekgebouw aan het IJ‘ in Amsterdam. The Awards Ceremony is the highlight of a weekend of festivities for the 100 winning photographers.

The international jury of the 55th annual World Press Photo Contest selected a picture by Samuel Aranda from Spain as the World Press Photo of the Year 2011. In addition, the contest determines winners in the following categories: Spot News, General News, People in the News, Sports Action, Sports Features, Contemporary Issues, Daily Life, Portraits, Arts and Entertainment and Nature. The winners were selected from over 100,000 images submitted to the contest.
View the entire collection of winning images from the 55th World Press Photo Contest: worldpressphoto.org

After the contest, the prizewinning photographs are assembled into a traveling exhibition that is visited by over a million people in 40 countries. A yearbook presenting all prizewinning entries is published annually in six languages.
World Press Photo is an independent, non-profit organization based in Amsterdam, Netherlands. Founded in 1955 the organization is known for holding the world’s largest and most prestigious annual press photography contest.

The welcoming procedures and seating of the 400 guests and dignitaries was a task of the Protocolbureau. Hosts and ushers assisted during the reception of the many international guests. 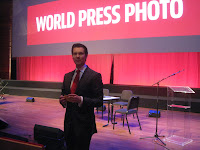 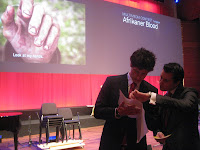 Photo (presentation in the backgroud):
AFRIKANER BLOOD
Multimedia Contest
1st prize
2012
Kommandokorps in South Africa organizes camps during school holidays for young white Afrikaner teenagers, teaching them self-defence and how to combat a perceived black enemy. The group’s leader, self-proclaimed ‘Colonel’ Franz Jooste, served with the South African Defence Force under the old apartheid regime and eschews the vision of a multicultural nation.