Blog
U bevindt zich hier: Home1 / Blog2 / event3 / HAFF organizes the Night of the Stars gala in the Hall of Knights in The...

The annual fundraising event ‘Night of the Stars Gala’ of the Holland America Friendship Foundation (HAFF) was held this year on Monday 15 April 2013 in the Hall of Knights in The Hague. The Night of the Stars was founded in 2003 by the former ambassador of the United States to the Netherlands, Clifford M. Sobel and his wife Barbara Sobel.

The Night of the Stars celebrates the unique bond between the Netherlands and the United States of America and supports educational and cultural exchange programs between the two countries. Beneficiaries are the Fulbright Program, the John Adams Institute and the The Franklin and Eleanor Roosevelt Institute.

Read here the article about the gala by Leo van der Velde of the Dutch newspaper ‘Algemeen Dagblad’ (click to enlarge): 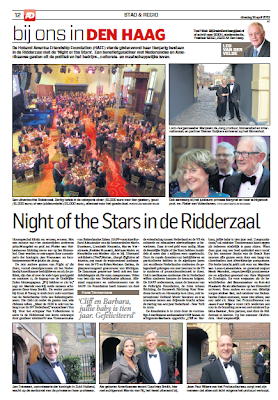 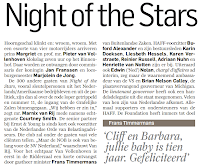 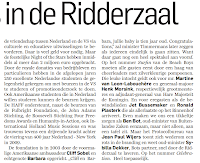 Choose another article of your interest in the blog archive in the right column. Or scroll further down for books about protocol, interesting links, articles about protocol and protocol related tweets.
20 april 2013/door protocol
https://protocolbureau.com/wp-content/uploads/2017/01/logo_protocolbureau_GOUD-5.png 0 0 protocol https://protocolbureau.com/wp-content/uploads/2017/01/logo_protocolbureau_GOUD-5.png protocol2013-04-20 20:34:002013-04-20 20:34:00HAFF organizes the Night of the Stars gala in the Hall of Knights in The Hague