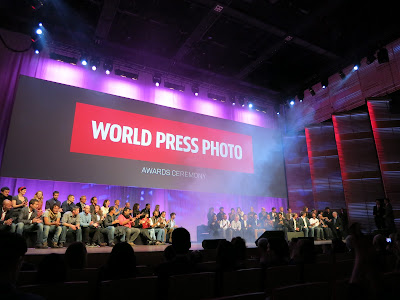 Prince Constantijn of the Netherlands presented the Swedish photographer Paul Hansen the World Press Photo of the Year Award at a ceremony in ‘Muziekgebouw aan het IJ’ in Amsterdam yesterday. Hansen won the international prize with a photo of a Gaza burial.

The bodies of two-year-old Suhaib Hijazi and his elder brother Muhammad, almost four, are carried by their uncles to a mosque for their funeral, in Gaza City. The children were killed when their house was destroyed by an Israeli airstrike on 19 November. The strike also killed their father, Fouad, and severely injured their mother and four other siblings.

Israel had begun an intense offensive against Hamas-ruled Gaza on 14 November in response to continued rocket fire from Palestinian militant groups. In the first days of the offensive, Israel struck at targets of military and strategic importance, though the scope of attack later widened to include residences suspected of harboring Hamas militants. By the time a ceasefire was brokered on 21 November, over 150 people had been killed in Gaza. Of these 103 were thought to be civilians, including at least 30 children. 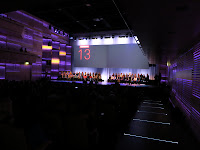 World Press Photo is an independent, non-profit organisation based in Amsterdam, Netherlands. Founded in 1955 the organization is known for holding the world’s largest and most prestigious annual press photography contest.

The awards ceremony is held every year in the ‘Muziekgebouw aan het IJ’ in Amsterdam. After the contest, the prizewinning photographs are assembled into a traveling exhibition that is visited by over a million people in 40 countries. A yearbook presenting all prizewinning entries is published annually in six languages. Prince Constantijn is patron of the World Press Photo Foundation.

The contest is judged by leading experts in visual journalism who represent various aspects of the profession. The composition of the jury is changed from year to year, they operate independently, and a secretary who has no vote safeguards our fair and balanced judging procedure. 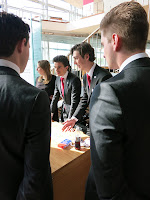 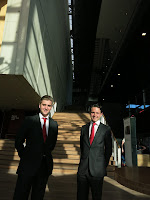 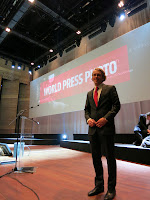 Choose another article of your interest in the blog archive in the right column. Or scroll further down for books about protocol, interesting links, articles about protocol and protocol related tweets.
28 april 2013/door protocol
https://protocolbureau.com/wp-content/uploads/2017/01/logo_protocolbureau_GOUD-5.png 0 0 protocol https://protocolbureau.com/wp-content/uploads/2017/01/logo_protocolbureau_GOUD-5.png protocol2013-04-28 08:58:002013-04-28 08:58:00Prince Constantijn presented Paul Hansen the World Press Photo of the Year Award